As one of the first of its kind, the Molecular Biology Graduate Program was formed in the late 1950’s with the goal of providing a multi-disciplinary graduate training environment in the new area of molecular biology. Salvador Luria, a Nobel laureate at the Massachusetts Institute of Technology, was invited to the University of Wisconsin-Madison to analyze the specific conditions existing here and to suggest what might be done to further research and training in the active new field of “Molecular Biology.” 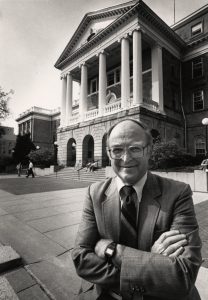 The building committee was co-chaired by Professors Paul Kaesberg and Robert Bock. Professor Kaesberg is well-known for his early X-ray studies of viruses, which showed that the protein portion of a virus exists in the form of an exterior shell surrounding and protecting the virus’ centrally located genetic material. Professor Bock was considered a national leader of university research and graduate training. He also served as scientific advisor to four Wisconsin governors. While he was dean of the graduate school from 1967 to 1989 the university’s research programs grew to nearly a $300-million-a-year enterprise. As a scientist he conducted basic studies that helped to decipher the genetic code and was the first to crystallize tRNA, a keystone molecule in the process of protein synthesis. He retired in 1989.

The Molecular Biology/Biophysics building was completed in 1967 and became the home for the center’s graduate degree programs. After the death of Professor Bock in 1991, the building was renamed in his honor. Extensive remodeling and upgrading of the building facility were completed in the summer of 1998.

For more information about the history of Robert M. Bock Labs and the development of the Molecular Biology Graduate program, please see this historical perspective from former chair of the Laboratory of Molecular Biology:

Halvorson, Development of Molecular Biology
at the University of Wisconsin,
Madison 2007, Biology of the Cell